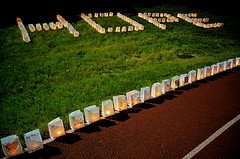 This month’s download is a song about the Luminaria ceremony at the American Cancer Society’s Relay For Life event. It was mostly written by my friend Jack Storey – it was his words and his ideas for the music that I had the privilege to work with and complete. He was kind enough to offer me co-writing status for my contribution, but I am just honored to be associated with the song and the event.

Jack asked me to finish this song and perform it for the Relay For Life Nationwide Summit in 2008. I posted about that event earlier – Jack videotaped the performance and posted it on YouTube. Since that event, I promised to record a version of the song to make available to anyone who would like it for their Relay For Life. After many months, I finally decided that what I recorded for the original demo I shared with Jack really captured something raw and good, and so I post that version here. Maybe someday I’ll re-record the song with a much fuller arrangement, but for now, I give you the simple, heartfelt piano and vocal demo. I hope you enjoy it. Please do let me know.

By the way, the picture above is courtesy of  “Cowboy” Ben Alman via Flickr.com and shown here under a creative commons license. It’s from the Luminaria ceremony at the Watertown, MA Relay For Life. Thanks Ben!

14 thoughts on “New Song – Every Candle Has A Name”