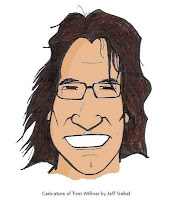 I know, not exactly the song title one might expect to come out around the holidays. Though maybe what some might be thinking… Actually, this is a song I’ve been working on for quite some time. It’s about addictions. Through the years I’ve struggled with my own, and started to write about that struggle, but couldn’t quite finish. So I contacted my friend and songwriting partner-in-crime Ed Scheiblin, who took the lyrics I had written so far, and completed the song. I think the collaboration hit the mark I was hoping for.

Scene Two: Earlier this year, I connected via Facebook with a friend I grew up with named Jeff Siebel. One day I discovered a note he had written called “One sip to insanity.” I discovered he was an alcoholic, who hadn’t touched a drink since June of 2008. His writing was powerful, vivid. I was always floored by every new note he wrote. His stories and prose were simultaneously devastating and inspiring.

Scene Three: December 6, 2009. Jeff posts “Day One Again.” In his own words, “530 days of sobriety vanished… I start over.” I didn’t know what to say. I’ve battled and continue to battle my own demons, but Jeff’s struggles are in a different league than mine. I reached out to him, song in hand. He loved it. He and I decide that when he writes his book, and goes on speaking engagements, this song will play.