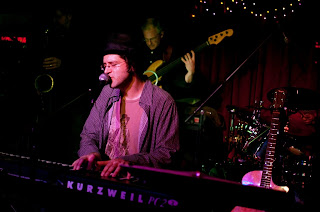 Many thanks to everyone who came out to the show at the Red Light Cafe on Saturday the 9th. What a terrific crowd! All of us in Urban Blue had a blast. It was great to have two full hours to fill up with music. A special thanks to Aree and Katie, my young terrific friends in the crazy hats, for helping so much with the email list and CDs. Thanks to everyone who brought out new friends as well.

Many thanks to Richard Powers for taking such great photos of the show, too. That’s his handiwork I’ve included here, and see more of his photos from the show below.

Also, thanks to the magic of handheld digital recorders, specifically the one belonging to bassist Lee Nunn, we got a simple recording of the show. It was tough to choose which song to share, but in the end I had to go with a cover by English singer-songwriter Kirsty MacColl that features Kristi Budd on vocals and Lee Hansen on the trumpet.

View photos of the show by Richard Powers

Listen to “In These Shoes”