Back in the early days of dreaming about a career in music, I was always looking for good information to help me achieve that dream. Oh sure, I would be lying if I said I didn’t imagine getting signed to a major label, touring, and performing in stadiums to thousands of adoring fans, but I was pretty sure the jump from recording songs on a four track cassette recorder in my basement to super stardom involved quite a few steps in between. I always had a bit of a practical streak in me. Back when I turned sixteen and many of my fellow classmates were talking about the Chevelles and Camaros they desperately wanted to own, my dream car was one with four wheels that started every time I turned the key. So I guess it made sense that the book I was drawn to was one by Jana Stanfield called The Musicians Guide to Making and Selling Your Own CDs and Cassettes. This seemed a much more attainable step from my vantage point, not to mention that the subtitle, How to make tens of thousands of dollars a year performing and selling your own music, sounded like a respectable realization of my dream.

The book was terrific, and exactly what I needed at that moment. Stanfield detailed all the steps she took and things she learned that enabled her to go from having a career in broadcasting to having a career doing what she truly loved, music. I felt the similarity to my own situation; I decided to get an engineering degree rather than one in music so I’d have something to fall back on, yet that fallback position quickly became my career that seemed to continuously pull me further and further away from my dream.

Interestingly enough, there was one thing from this book that has consistently stuck with me more than anything else I’ve read or any advice I’ve received. She called it “three steps, no fail.” It basically goes like this: You need to build a bridge from where you are to where you want to be. You don’t have to be able to see the other side, just the first three steps. Once you take the first three steps, you’ll be able to see the next three. And the three steps must each be something you couldn’t possibly fail doing in a week’s time. That’s it. It’s that simple, which is why I think it’s so powerful. 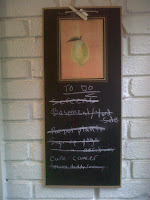 Now I have always been a compulsive list maker. I occasionally stumble across lists I made years ago, and I can’t help but test how well I did accomplishing each of the goals or tasks. Surprisingly, the results are usually favorable. It kind of falls in line with an idea from Deepak Chopra, which is about the power of intention. If there’s something you want, make your intention known and the universe will respond. Ever notice how if you write something down, you almost don’t need the paper anymore to remember it, but if you don’t write it down, it’s so easy to forget? I believe there is a power in making these lists, in setting these goals, and making that intention known even if it’s just to yourself. One of my most noteworthy and visible to-do lists is one my wife and I made years ago on a chalkboard in my house with the following tasks on it: replace screens, yard sale, re-pot plants, sign up for yoga and aerobics, cure cancer, become daddy/mommy. They are all crossed off, except cure cancer, which I am too nervous to cross off, even after over a decade of being cancer-free.

OK, so back to three steps, no fail. That method has had a hand in almost every success I’ve experienced in my music career – CD releases, my musical, press, gigs, travel, contracts, you name it. I take things one or two projects or opportunities at a time, and while lately I have begun setting larger goals and creating a business plan, I still take these small steps toward things that I know I want to do at the time without fully knowing where it will take me. This week, I decided to contact venues about a CD release party, contact an event planner for ideas and potential help, and create this blog post. Last week I made a band rehearsal plan, sent off my new CD and artwork for replication, and had my lawyer review a publishing contract. They are all achievable single steps to take in my musical journey of a thousand miles, and it makes it possible to make progress toward what I want while I’m doing what I must.

Have you ever used this method or something similar? What were your results?