On Friday the 18th, a friend at work (who shares my love of the musical Les Miserables) popped up on my screen in an instant message. “Will you be skipping out at lunch to audition for The Voice?” to which I honestly replied, “I didn’t know about the auditions.” He kindly finished with “I’d vote for you no matter what.”

So I asked Google about it, and sure enough, Google informed me that NBC was indeed holding auditions for The Voice in Atlanta that weekend. I researched what you needed to do to sign up, then debated with myself about whether or not to audition. I talked it over with my family who all encouraged me to go.

My decision was greatly influenced by a conversation I had with my son. “What are the chances that you’ll get on the show?” he asked. I answered, “I don’t know, but I suspect it’s very slim.” After a few seconds of silence, I continued, “I do know one thing, though. My chance of getting on the show is zero if I don’t audition.” He smiled. I had my answer. I ended up signing up for the fourth and final time slot, Sunday at 2 PM. 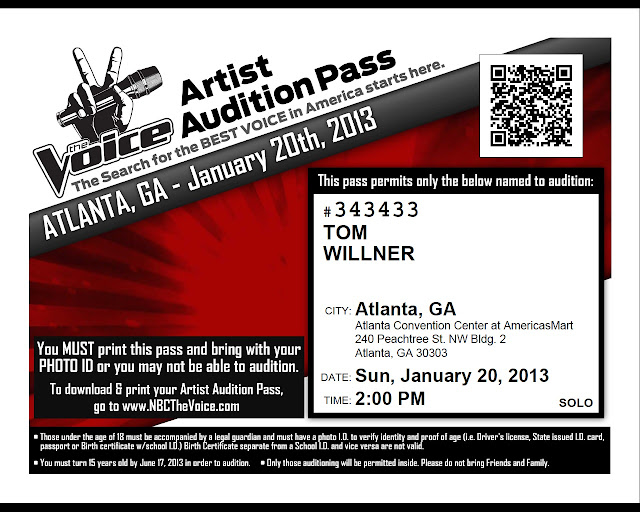 As instructed, I had chosen and practiced two a cappella songs – a first and second choice – and what portions of each I would sing. I chose an outfit that I thought was appropriate and comfortable for “performer Tom,” and at 1:30 PM on Sunday, I hopped into my car to drive downtown. As I turned off of my street, my car stalled. I rolled back to the curb and popped the hood (hoping to find a big on/off switch that had tripped, but no such luck). I checked my oil using some dry leaves – I’m high tech – and found it low, as was the gas. I turned the key and gratefully it started, so I headed for the neighborhood gas station. It stalled again on the way but luckily started again. Not what I’d call a good start to the audition.

I made it to the gas station, added oil and gas to the car, and hoped for the best. Car troubles subsided, and I made it all the way to my parking spot downtown. (Three days and $450 later, my car regained its reliability, but that’s a different story.) I walked to the Convention Center where the auditions were held only to see a line wrapped around the building. As I walked to the end, I noticed it also wound into the covered area, where the line wrapped back and forth several more times.

It took about an hour before I made it to the door, where I showed my audition pass and driver’s license, and went inside…

…where bags were checked, security guards used portable scanners to make sure none of us were there to make the nightly news instead of The Voice, and we were on our way…

…to the next line. 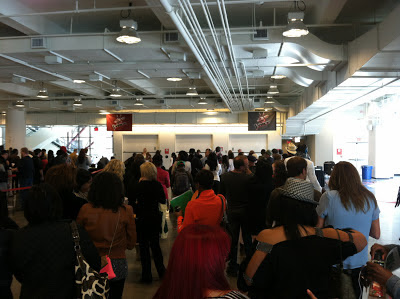 This was the line to check in, which took about a half hour. During that time, something inspiring happened that changed the whole experience into something entirely new and fun for me. You see, after you check in, they send you over to a seating area of about 1200 chairs. I know, because I had several hours to count the rows, the chairs in each row, and the sections. This seating area was filled once, then filled about halfway again, making that roughly 1800 people auditioning, to the best of my estimating abilities (and remember, this was the fourth session of the weekend). But what was fun was that while we all waited roughly three hours in those chairs, they kept us from going stir crazy by inviting us to sing.

Many people went up and sang one of their prepared songs through the bullhorn. And sometimes they asked us to sing songs as a group, which brings me to the truly inspiring part. On several occasions, I found myself singing a song with an extremely talented group of several hundred people. Sometimes in unison, sometimes call and response, sometimes in glorious four part harmonies. These weren’t no-talent hacks trying to get on a TV show, these were singers. Damn good ones. The video below really doesn’t do it justice – it doesn’t capture the raw power of personally hearing hundreds of talented singers all belting out the national anthem in unison. But I would book this group to open the Super Bowl. Call it the “talent of the crowd,” or the WikiChoir.

In addition to hearing many solo performances, giant choir gospel songs, and even The Brady Bunch Theme, I also met some truly nice people. There was Sara, my closest confidant and self-described middle-aged mother of three there to Cry Me A River; Robert, the fellow fedora wearing crooner auditioning for the first time since performing in “Hair” three decades ago; and Nicholas, the 18 year old baritone with ear buds always dangling from his ears. After three hours had passed, my group of thirty people were ushered into the next room…

…which, while smaller, still had close to two hundred chairs – I was too disappointed to accurately count them. Fortunately, the wait there was much shorter, and before I knew it, ten of us were brought to stand outside of one of the ten auditioning rooms.

Finally, the ten of us went inside a large room, where there were two sets of five chairs facing each other, a small piece of blue tape on the floor, and a woman at a table with a computer. We sat down, and she informed us that she would call us one by one, we’d step up to the blue tape, she’d ask a couple of questions, and then we’d sing. Sara was the third to go, I was the sixth, and Nicholas went last. (Robert went with a different group of 10 and we wished each other good luck outside before I came in.) At my turn, I went up, exchanged pleasantries, answered my questions, then proceeded to belt out, a cappella, the last bridge and chorus of Georgia On My Mind by Ray Charles, with all the heart and soul I could muster.

After everyone was finished, the nice woman thanked us, informed us that none of us were chosen, and suddenly, five hours after I got in line, it was all over. We said our goodbyes and left.

I went into the audition with no expectations other than the hope for an experience to remember, an adventure. I had no idea what they were precisely looking for, nor frankly did I care. I was there to sing the best I could and just be myself. If I happened to be what they were looking for, then a new adventure would begin. If not, I’d have the experience of taking a shot, and putting myself out there. I got my adventure, and I met some lovely and talented people along the way. Every single person who worked there on behalf of the show was kind and good at what they did. And I had a belief reaffirmed; that there are so many talented people out there, everywhere you go, and what a joy it is to experience.

0 thoughts on “My Audition for NBC’s “The Voice””