After hiring a Director, a Musical Director, actors, musicians, securing rehearsal space, and a month of scoring music, I finally began the week long workshop of my musical. On day one, between the music and script, we handed everyone an almost 200 page binder. Musical Director Michael Fauss began rehearsing the music with the actors, then Director Scott Warren began reading the book with them. We edited things as we went through the week.

After four days, it was time to give the actors a break and rehearse with the musicians. I worked through the night before the first band rehearsal until 4 AM creating woodwind and bass scores. It paid off, as the rehearsal went very smoothly on Saturday. On Sunday, the musicians and actors got together and rehearsed the whole show. Sadly, we were so busy that weekend that I never managed to snap a single photo. It was amazing to see it all coming together.

Then it was Monday, the day of the Showcase.

After a stressful setup and sound check (what’s a live show without stress?!?!), we all disappeared into the dressing rooms, and the doors officially opened at 7 PM.

At a little after 7:30 PM, the lights dimmed, and we all walked on stage to present the showcase performance of “Turning Thirty, The Musical.” An audience of over 70 people attended. After I introduced the show, for the first time ever I got to sit down with the audience and watch my show performed. It received a standing ovation.

After the show, we made our way to the lobby for refreshments and a talkback. The audience provided wonderful feedback, including some very insightful comments by Theatrical Outfit Executive Artistic Director Tom Key. Writer Clare Richie for Atlanta Intown Paper attended and her article about the show has been published in the July edition: 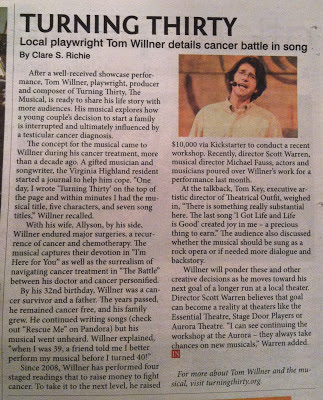 Click here to see the full program handed out at the show: 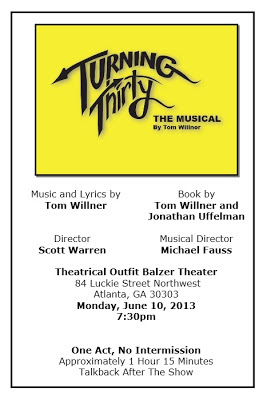 So what are the next steps? Well, I’m planning to work with a playwright to help flesh out some more of the book, to help establish the key characters and further define their relationships. I may add a title song. We’ll see. Once I’ve revised the show a bit further, and tried it out with some small readings, I will pursue a professional production. My goal is for the 2014-2015 season. 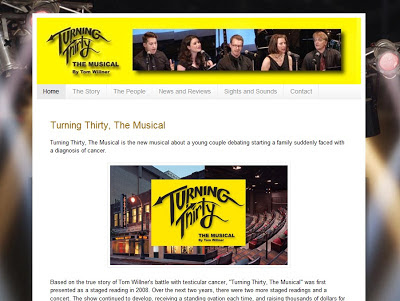 Thanks to all who came out to the showcase, who supported the workshop, and who continue to support the show.