Today, I officially added the word “Runner” to my blog description. It was time. Running has become such a big part of my life that I now consider it to be part of who I am. (I also changed “Technologist” to “Geek” which seemed less pretentious and frankly more appropriate.) 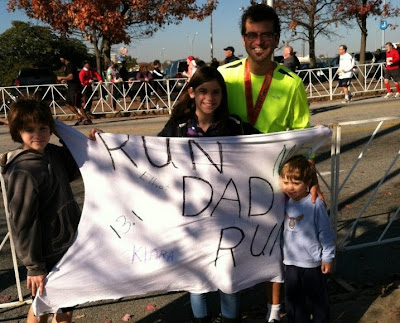 So how did I become a runner you ask? Well, running and I have dated for well over a decade. We had a few times when we got more serious, and I ran a few 5Ks, but inevitably we would part ways again. Then, when we got together again in August of 2012, we really clicked. I’d go out for a run and felt like I could run forever. I got in that “zone.” Mind you, it wasn’t easy. Over the course of the next few months, I injured my knee and my foot (more on that later). But in October, we decided to get hitched. We set a date – Thanksgiving Day – at the Atlanta Half Marathon.

Unfortunately, by the end of August, my knee really started hurting. I got my first introduction to how easy it was to injure yourself as you increased distance. You really need to listen to your body, build up slowly, and get help understanding how to train for and run long distances. I got through it, by taking a week off of running and allowing myself to heal, then investing in a really good pair of shoes.

I started running again in September, and by the end of the month, I had reached seven miles. By mid-October, I reached nine miles, after which I decided to register for my first half marathon. Unfortunately, I had run nine miles on hilly terrain I had not run before. I ended up getting extensor tendonitis in my foot. This sidelined me for two weeks. I was nervous I would not get back on track and be able to run the half marathon I had just signed up to do.

The two weeks off allowed my tendon to heal, and I began to run again, very careful not to get injured again. By November 10, I hit the eleven mile mark. One week later, twelve. Five days after that, I ran 13.1 miles in the Atlanta Half Marathon in 2:04:06. I was incredibly proud of this accomplishment. 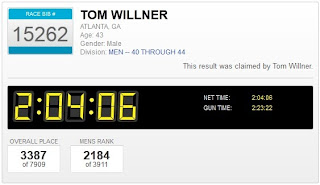 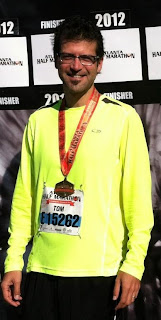 Before We Go Further, A Little History

In high school, I could barely run a mile. I finished second to last in my grade in the one mile run portion of the fitness test. Basically, prior to cancer, I was a terrible distance runner; the longest distance I could consistently run was about a mile and a half. After cancer, and particularly chemotherapy, I seemed able to rebuild myself differently. I ran a 5K and had gotten up to six miles at my longest. However, as I alluded to earlier, running came and went, until this past year.

I knew I needed some kind of exercise in my life again, but I had conditions. I’m not a fan of gyms; I fit the norm in that I always stop after about three months. Basically, I don’t find much satisfaction in a room with machines or weights. I wanted to be outside, and I didn’t want to spend a lot of money. So I started to run again and gradually increased my distance until I started going further than I ever had. I got in the zone. I enjoyed taking in the scenery, and did not listen to music. I would just be in the present, running. That’s when I ran my first half marathon and became:

I took off a couple of weeks to recover from the race, then began running again. This time I tried to go faster, but I did it all wrong. I did foolish things with my stride and my cadence, so I really gave my body a pounding. By the end of December, I had pretty bad pain in my hip and abdomen. I decided to back off the speed, and continued training while managing the pain. I ran through the bad winter months, by getting the right clothing to make that possible. I preferred to run outside even if it was dark, freezing, or pouring rain, rather than run inside on a treadmill. I felt alive. I signed up for another race, the 2013 Publix Georgia Half Marathon. By the time I got close to the race in March, I started to get a consistent pain in my foot and got worried. When the day came, and a friend asked what my goal was for the race, I said “somewhere between under 2 hours and just finishing the damn thing.” As it turned out, I had a great race day and finished my 13.1 mile run in 1:57:14, my new PR. 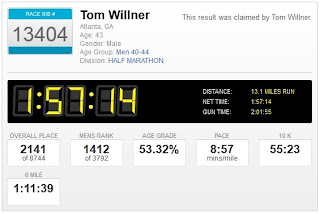 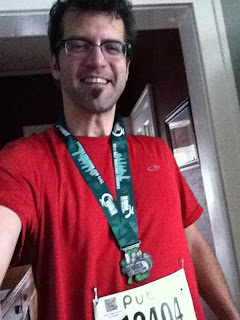 After crossing the finish line nearly three minutes ahead of my goal, I was flying high. I wanted to run even more, so I decided to seek some professional help to stop the injuries. First I talked to my friend Jesica, an avid runner and blogger (see rUnladylike.com) who recommended her massage therapist, Tony Adams. Tony was terrific, and ultimately recommended I go see Dr. Ched Garten, a Non-Operative Sports Medicine Physician. Dr. Garten diagnosed me with tight iliopsoas muscles and mild sports hernia, and referred me to Physical Therapist Kate Edwards. Kate realized that all my surgeries during cancer treatment had left my muscles and body all out of whack. Over the course of several months, she used a combination of manual therapy, exercise, stretches, dry needle therapy, and redcord neurac therapy to get my body and muscles back in alignment and functioning properly. Thanks to her, I am now training for:

I am now in week 24 of my marathon training plan, and I signed up to race on November 9th at the 2013 Soldier Marathon in Columbus, GA. I have run a 20 mile run and a 6:35 minute mile. I have always been a night owl, but now I wake up ridiculously early on Saturday mornings so I can start running in the dark to avoid the Atlanta heat during several hour runs. There’s so much more that I can talk about, but I’ll leave those for other posts. Let’s just say that I love the challenge, the commitment, the perseverance, and the sense of accomplishment. I am a runner, and I fully intend to be a runner for the rest of my life.