This past weekend, I ran my first marathon. I chose the Soldier Marathon in Columbus, GA because it’s a flat course, an easy drive from Atlanta, and got such great reviews online. I found it to be well deserving of it’s reputation – it was run well, the volunteers, soldiers, and drill sergeants were all great, there were plenty of aid stations, and the course was beautiful.

First, though, I must list the comedy of errors that was my night before the race:

In response, a friend sent me this text message: “So all the negative of the weekend is now removed. The rest will be great. Stay positive. Its the last bit of training u needed to succeed.” It was exactly what I needed to hear, and fortunately, it all worked out in the end. Now back to the recap.

At the National Infantry Museum, the night before the race, packet pickup was handled well, and everyone was friendly and helpful. I always get excited about the race and running in general at packet pickup.

Race morning was smooth. Getting to the Museum and parking was easy. It’s one of the things I like about a smaller race. The Soldier Marathon had 2250 runners registered, 738 of which were for the full marathon. I was bib number 642, which is a big difference from my first half marathon in Atlanta where my bib number was 15262 of over 16,000 runners! Not coincidentally, I chose to wear the shirt from my first half marathon to run my first marathon.

Race morning started in the low 40s, getting up to 60 by the end of the race – perfect running weather. We started at 8:00 AM. The course ran from the museum, down through Fort Benning, up the Riverwalk and into Columbus with a quick pop into Phenix City, Alabama. Then back down the Riverwalk to the museum. It was a beautiful, scenic course.

As far as my own experience and performance, I ran for about four miles on my own and found myself near the 4:25 pace group a lot. So I decided to join them since Pacer Jim was funny and offered great tips along the way, especially for a newbie like me. I stayed with the group until almost mile 17, where I might add they had peanut butter sandwiches at the aid station. After running 17 miles, I have to say, that was the best peanut butter sandwich ever. Other than that, I had fueled with Huma gels – by far my favorites – that I had brought with me. No need for the water belt either with all of the aid stations.

I thoroughly enjoyed the encouragement from volunteers, spectators, and soldiers. The drill sergeants were particularly fun; one time at a hill when a person next to me started walking, the sergeant yelled “Walking is authorized but highly discouraged!” Another runner actually stopped for a staged picture with a sergeant yelling right in his face. My family cheered me on at the beginning, mile 15, mile 21, and the finish, which, of course, was always a treat.

Things continued to go well through mile 20, where I reconnected with the now alone Pacer Jim. He and I ran together for about two more miles, and it was a nice confidence boost, not to mention a great one on one conversation with a seasoned marathon runner. From mile 22 to 23, I ran step for step with another runner, after which we confided to being each other’s motivation to keep running. From mile 23 on, everything in my body told me to stop, and I had to keep going by pure will. When kind spectators and volunteers shouted that I was almost there, all I could think was that three more miles was most definitely NOT ALMOST THERE. Ten more steps, now you’re talking. But not another half hour of running.

At around mile 24 or 25, my right quadricep began to hurt. I now understand this is a risk in a flat course. I found I had to walk for a couple of minutes every half mile or so in order to keep the pain at bay. The last thing I wanted to do was injure myself and not finish after 25 of 26.2 miles. When I finally entered the parking lot of the museum, I knew I had to muster every last bit of strength for a good finish.

The cheering from the crowd and seeing my family at the end made the run down the Avenue of Flags magic. I finished in 4:32:16, incredibly sore and feeling a bit sick, but super proud. It was quite an honor at the finish to have a soldier put the medal on me. The food at the end was great – gourmet popsicles, breakfast burritos and hamburgers, fruits, bagels, snacks, water, sodas, and beer. I availed myself of quite a bit – finding myself starving after burning somewhere in the neighborhood of 3500 calories. 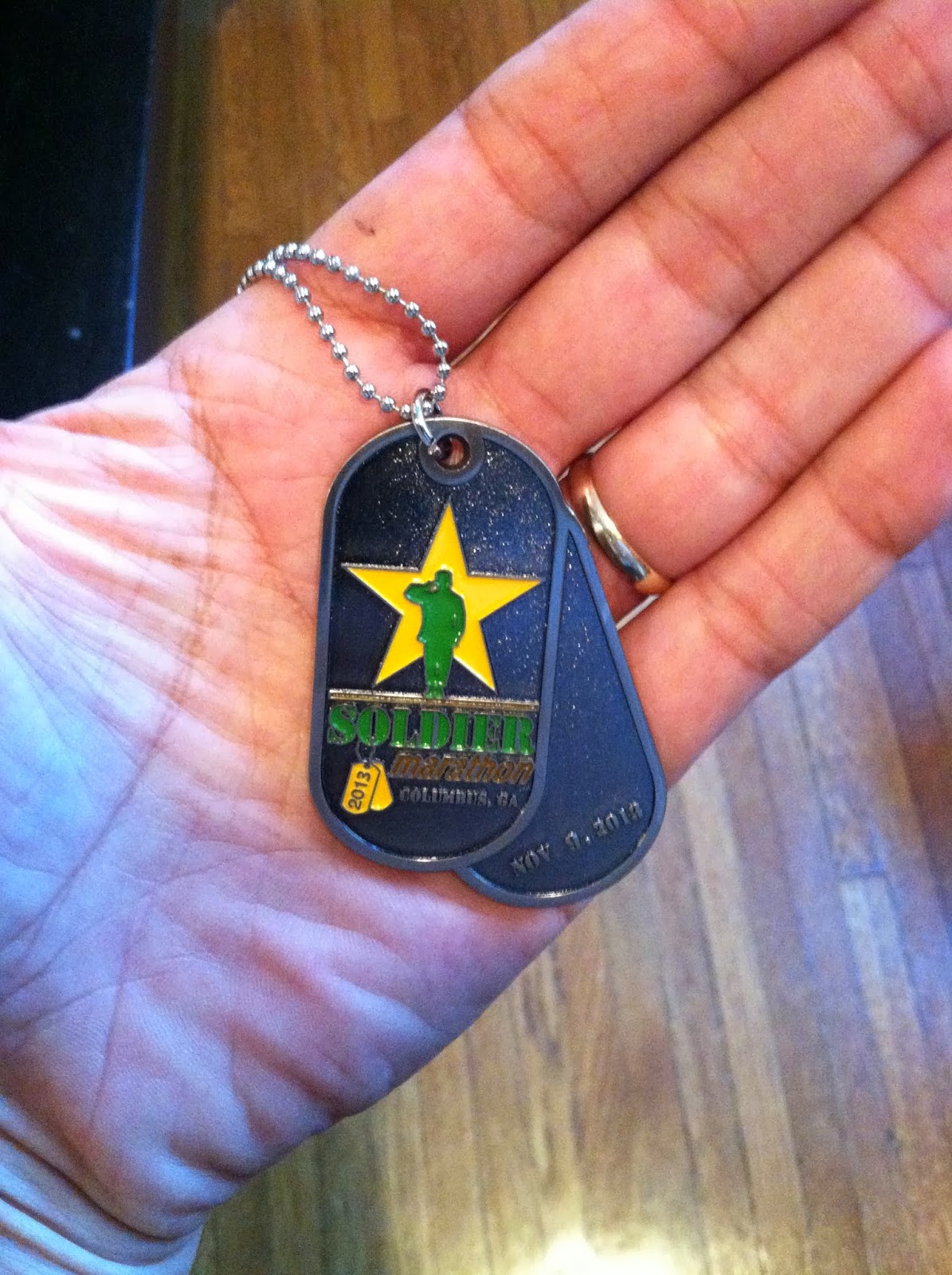 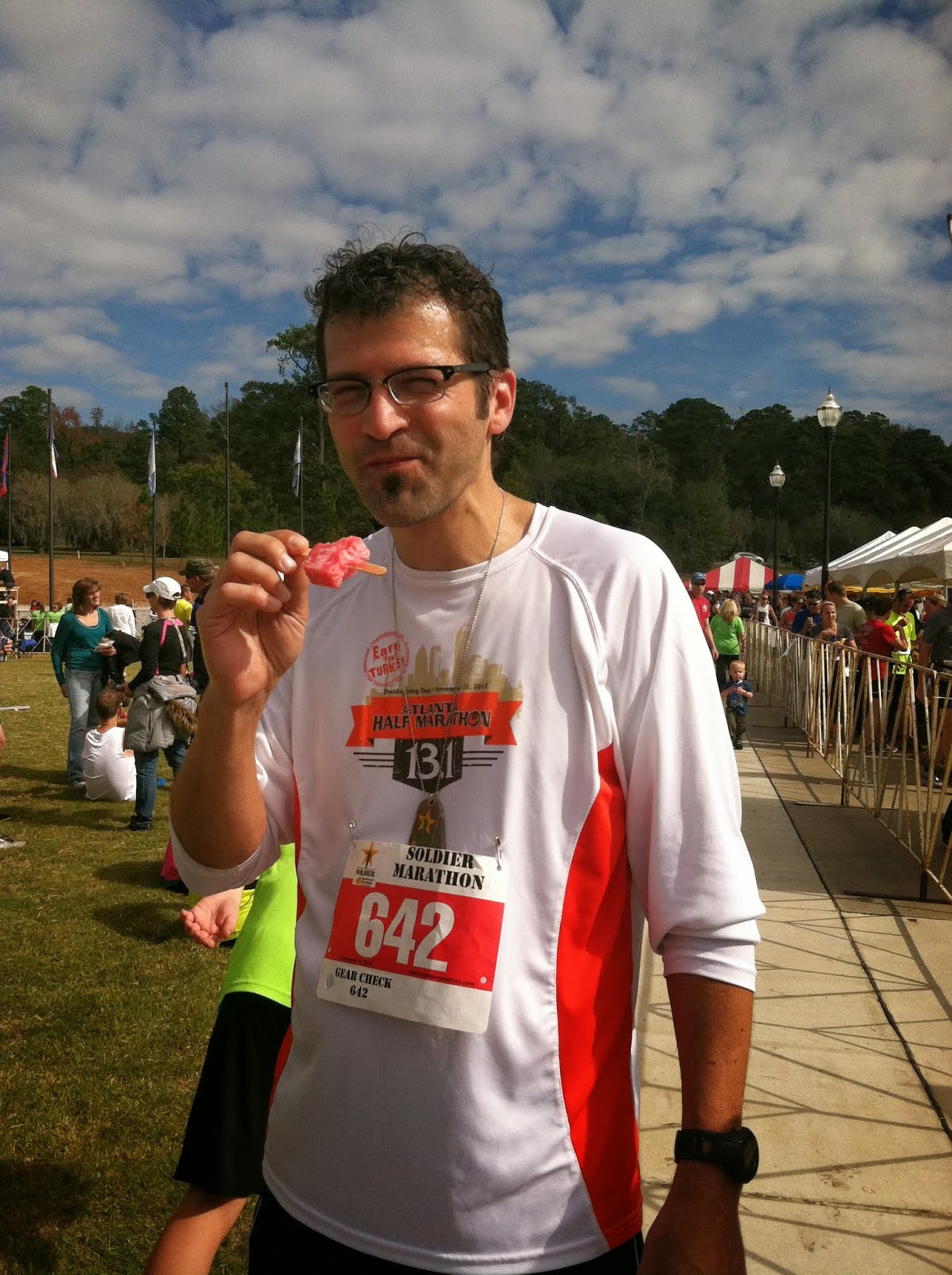 I loved the size of the race – there was never too much waiting for anything, or struggling to avoid other runners. One day I may shoot for one of the popular city marathons, like Chicago or New York, but I’m really happy I ran the Soldier Marathon. It raised money for the National Infantry Museum (my dad and uncle both served in the infantry) and House of Heroes, which provides home repairs for veterans and their spouses in need of that assistance. I ran in honor of my uncle, John Bukovich, who gave his life on June 18, 1944 during the Battle of Normandy. 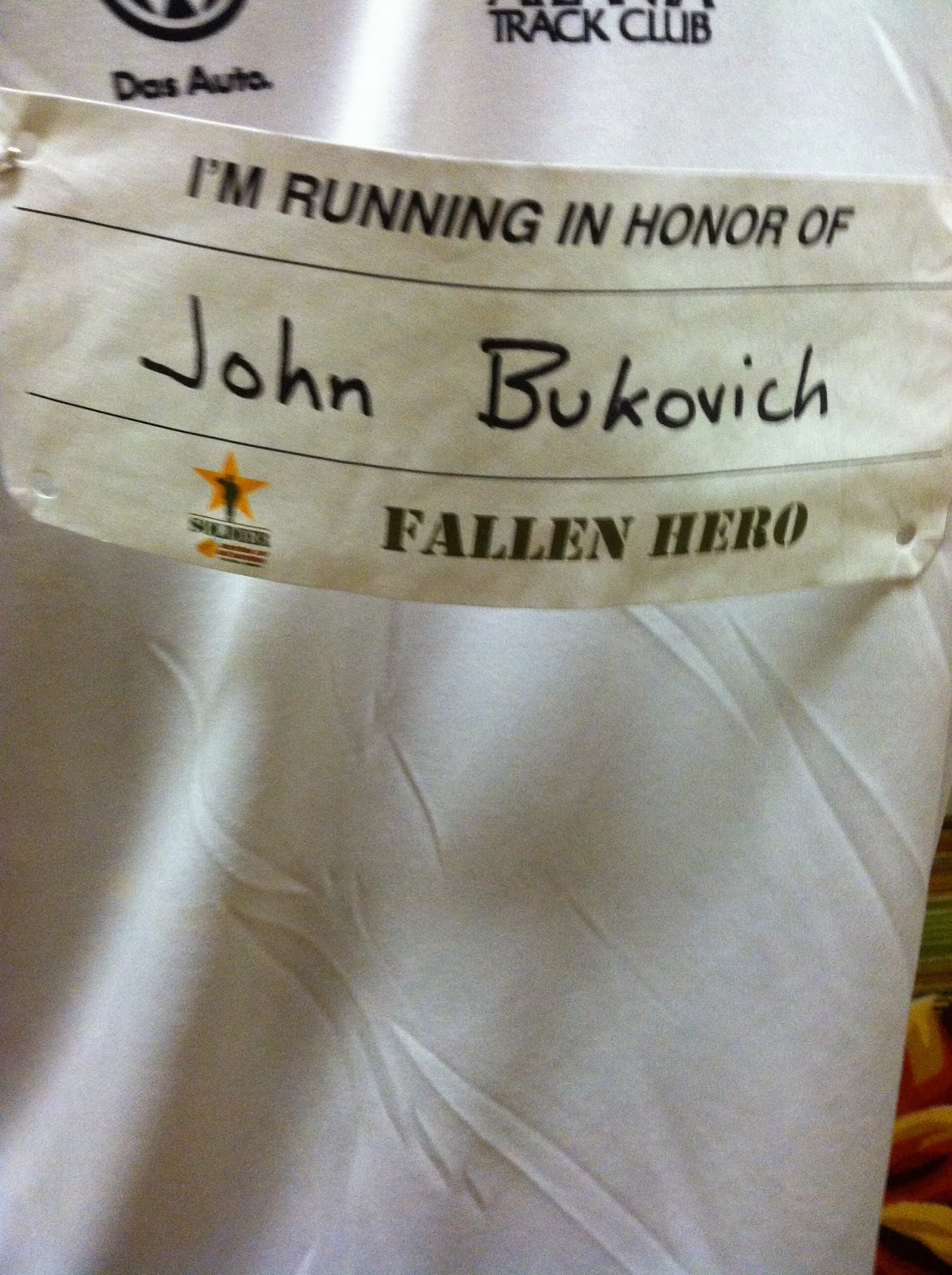 My wife asked me right after I finished if I would run another marathon. I told her I really didn’t want to think about running another marathon right then, but later I decided that I would. We joked that it was kind of like having a baby; it’s incredibly hard and painful, but soon that memory fades and you start thinking, “I want another one!”